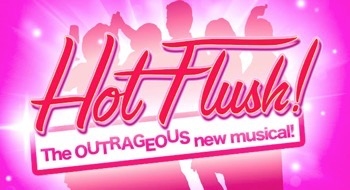 Having initially created the concept and story for the show, Olly went on to write the music and lyrics for 24 songs. The show proved a huge comic, all-be-it, racy hit! Hot Flush first premiered in 2007 at The Churchill Theatre, Bromley and to date has toured the UK no less than six times. The show originally starred Marti Webb, Rula Lenska, Sheila Fergusson, Rachel Izen and the role of ‘The Man’ was played by Sam Kane. For the initial UK tour, the band was a fantastic all female affair. In recent years the incredible Lesley Joseph proved the star attraction, lending the show her unique comic genius!

In 2009, one of the songs from the show went on to win the Stiles & Drewe ‘Best New Song Prize’. The award was presented to Olly at a Gala event held at The Playhouse Theatre in London’s West End.

There has been considerable interest in staging the show internationally. Australia and the US are possible future options. The US version would play under a different title, ‘Angry Housewives’.